DONATE TO CCC VIA ACTBLUE
Checks  to Cambridge Citizens Coalition can be mailed to CCC at P.O. Box 410291, Cambridge, MA 02141.
Sign-up for our Newsletter
​Get Active!  Stay Alert to what is happening on the ​CITY WEEKLY CALENDAR​
Read Our Blog: A Baker's Dozen of Things That Mattered to us in 2022
NEW ISSUE IN PLAY
New Radical AHO Citywide Up-Zoning Petition with potential impacts on many residents (11.21.22)
​                                       submitted by Councillors Azeem, McGovern, Simmons, and Zondervan
NEW AHO Citywide Up-zoning Petition Text
Read the new ZONING PETITION AMENDMENT TEXT ABOVE AT THE PURPLE LINK

Sign the PETITION TO "STOP THE MASSIVE RE-ZONE" Below
Sign Here the Petition: Stop the Massive Re-Zone
​This radical up zoning is on a fast track to confirmation. It was discussed  at the November 21 City Council Meeting, and has been moved to both the Housing and Neighborhood/Longterm Planning Committees. These committees likely will meet at the beginning of the new year. Of note: we have learned that last year six AHO developments were approved (with some 1000 units) so the current system is working. Moreover the city itself owns land with 13 parking lots in Central Square, and building additional AHOs on city-owned land makes for more financial sense and will not increase property values/housing costs to the same degree. Last year there were six AHO projects approved in the city with some new 1,000 units. Some of the city's own properties  should be used for new affordable housing, would be less expensive to build because we already own the property and would have less impacts on adjacent property values. Moreover if we fund these units we could restrict them to the 2,500 or so Cambridge residents on the Affordable Housing list (currently there are about 7,000 Cambridge residents AND workers on this list.
If we built on our own city property with our own funds we also could reserve more units for home purchases so residents would be able to build equity.

To be allowed if the AHO UP-ZONING PETITION PASSES:

Affordable Housing Developments in major Cambridge and Minor Corridors (see map below) can become 10, 11 or 15 stories high. In Cambridge City Squares (see map below) AHO structures can be taller than the current 23 story Rindge Towers. These structures also will be allowed anywhere in the city if multiple properties are joined together. Above right is an image of what such a 25 story structure might look like in Harvard Square at the Bank of America site. By way of comparison, the very tall Harvard Smith Center is only ten (10) stories tall. We are currently working with architects to create models of likely impacts for other neighborhoods of the city.
What parts of the city will be impacted by this zoning petition, and to what degree? Those residents living near major Squares (or several-property compositions) may see new structures reaching  25 story (280') heights. Those residents living near avenues or corridors in the cities may going forward  have affordable housing developments reaching 9, 10 or 13  stories without setbacks, parking, or green spaces.  SEE MAP BELOW.

KEY TAKE AWAYS
Robert Winters of Cambridge Civic Journal writes of this radical up-zoning petition: "This may well be the most outrageous proposal I have ever seen from this or any other Cambridge City Council." Any such structure built will become the new norm against which new structures of any time will be compared for local "context" and architectural appropriateness in arguing for extra historical or zoning allowances.


MAJOR ISSUES  are in play in this radical new AHO zoning petition. 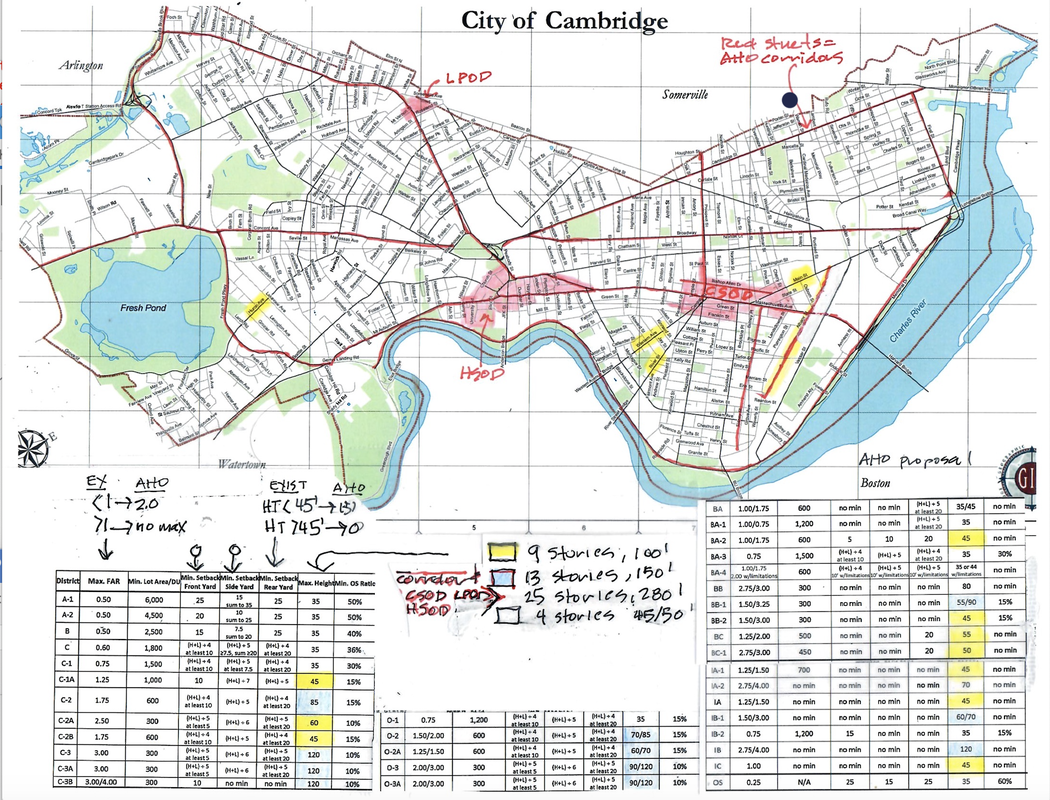 Timeline on the new AHO Amendment:  This will first be discussed at the Nov. 21, 2022 City Council Meeting and likely will be forwarded to the Housing and/or Neighborhood and Long-Term Planning Committees for discussion and public comment. After this it would likely come back to the Ordinance Committee before going to the Planning Board and then back to City Council for ordination, likely in the early New Year.

ALSO ISSUES OF NOTE IN THE WEEKS AHEAD

Mon, Nov 21 10:00 am   The City Council’s Health and Environment Committee will conduct a public hearing to discuss how to expand the availability of electric vehicle charging across the City and to review the effectiveness and accountability built into the City’s existing Green Fleet Policy.  (Sullivan Chamber and Zoom)
​

Tues, Nov 22 12:30 pm   The City Council’s Economic Development and University Relations Committee will conduct a public meeting to receive an update on the BEUDO amendments from the Community Development Department and a discussion of the environmental and economic impact of BEUDO on residential, business and academic properties/communities.  (Sullivan Chamber and Zoom) 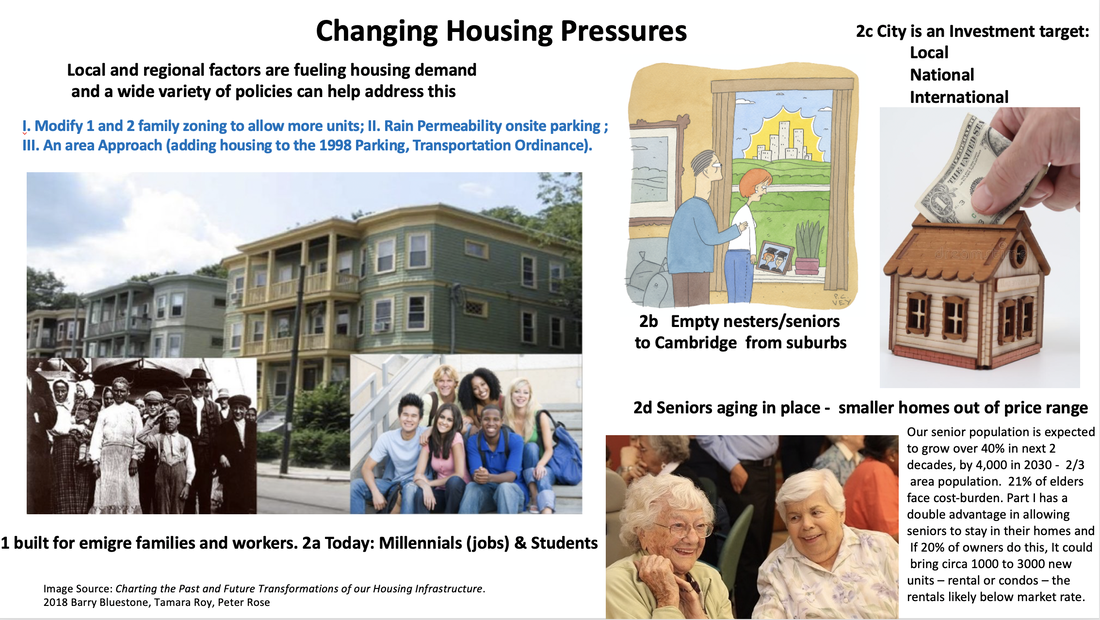 Three-Part Advancing Housing Affordability (AHA) Zoning Petition (pieces of a larger whole). See AHA link on this site for further information.
​
AHA UPDATE:  Meeting Results of the November 16, 2021  City Council Ordinance Committee and Planning Board Meetings: ​The City Council Ordinance Committee decided to keep the AHA “in Committee”  so that further work can be done on it. And they asked CDD to work with the Planning Board to come up with guidelines for new Single- and Two-Family District zoning language. The Planning Board, aware of the Council’s decision, gave a unfavorable vote to the AHA “as written” with the idea that the AHA proposals would be taken up by CDD and the Planning Board at a future meeting. At the same time, the Planning Board lauded the goals of the AHA petition and Hugh Russell noted that Part III of the AHA petition sought to address the root of our housing problem. This latter issue will be key if we are to have any sustainable plan going forward to address this.
One of the things we are asking for is that housing be added to the Parking, Transportation, Demand Management Ordinance where key decisions for commercial and institutional employers are made. With CDD now requiring that sometimes 20% of new commercial employees live in Cambridge, but not requiring that these groups address city and area housing needs has exacerbated the problem and made it untenable, particularly since what was supposed to be a new City Plan (Envision) has yet to be used to create a city wide housing plan, so we end up with more and more long term residents being displaced, and both rental and home ownership prices sky-rocketing.
WATCH   “How to Build Better Affordable Housing” a video by star videographer Federico Muchnik,  put out by the Walden Neighbors: https://www.youtube.com/watch?v=WcMxysb2U7s Three of CCC's candidates - Dennis Carlone, Nicola Williams, and Patty Nolan - all speak passionately in this video of the need for thoughtful design in affordable housing.
PLEASE READ:   Frogs-R-Us: Its Unrestrained Development that is threatening to boil us if we don't hop to polls
and Playing Monopoly in Cambridge is not just a game
​
Frogs-R-Us addresses some of the issues around developer interests and investments in Cambridge; Playing Monopoly takes up core issues in the architectural preservation issues around a move by another political party to gut long-standing conservation and historic preservation efforts in Cambridge
Above image left; the cover to Jean-François Batellier’s 1978 cartoon collection, “No Deposit, No Return.”; right: cover of Cambridge Monopoly game.
THANK YOU again! Wed. Sept. 29th, the City Council Ordinance Committee sent back to the City (manager), a plan (petition) to gut our citywide preservation efforts. The committee asked  the City Solicitor to determine if the petition was even legal and have required the petition to work with the CHC on possible compromise language.
​Video of the October 29 Ordinance Committee Hearing on the petition to limit  Neighborhood Conservation Districts with a majority of the public commentary opposed to this attempt to let developers have more power. Watch CHC Executive Director, Charles Sullivan on the  building and social history of this area: www.cambridgema.gov/-/media/Files/historicalcommission/pdf/echistoryandresarchitecture.pdf 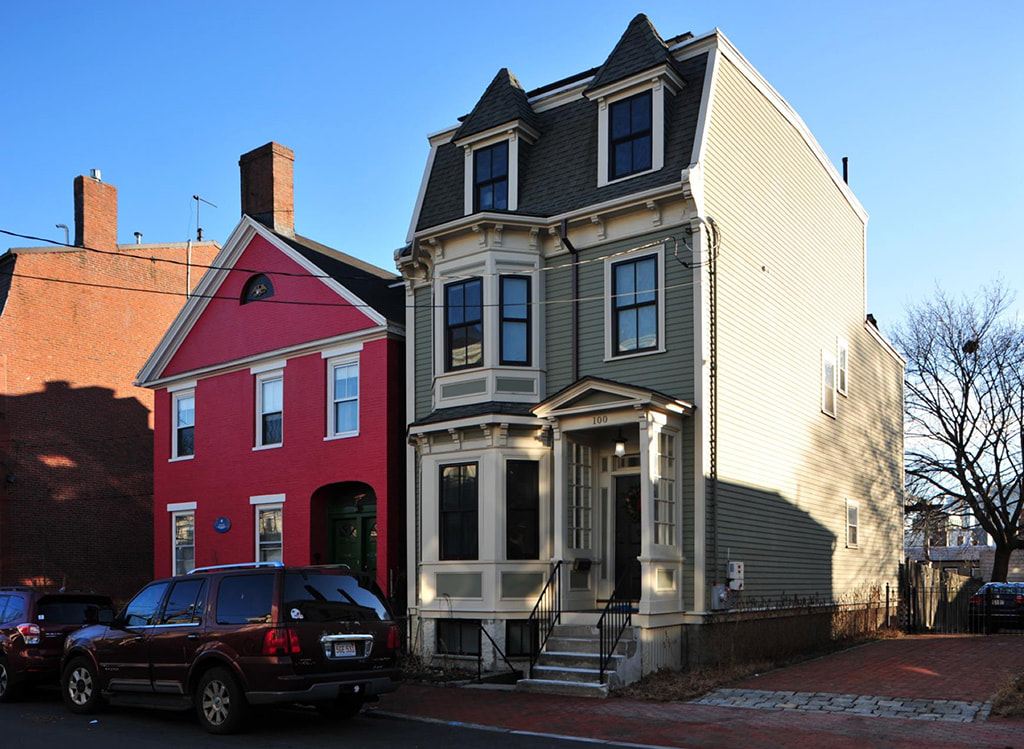 THANK YOU!   CCC's 2021 City Council Candidate Forum on Sept 26 from 4-6 PM went off without a hitch with a great Host Kerry Costello, a great moderator, Chuck Hinds, and a terrific group of City Council Candidates. Over 100 people were in the audience. A video of the event is now posted on Youtube: https://youtu.be/dnK2HglPr-8

Read about CCC's City Council  Endorsees BELOW  and on our Election Page. ​www.cctvcambridge.org/node/807441
TAKE THE CCC SURVEY - What Cambridge Issues are Important to you? 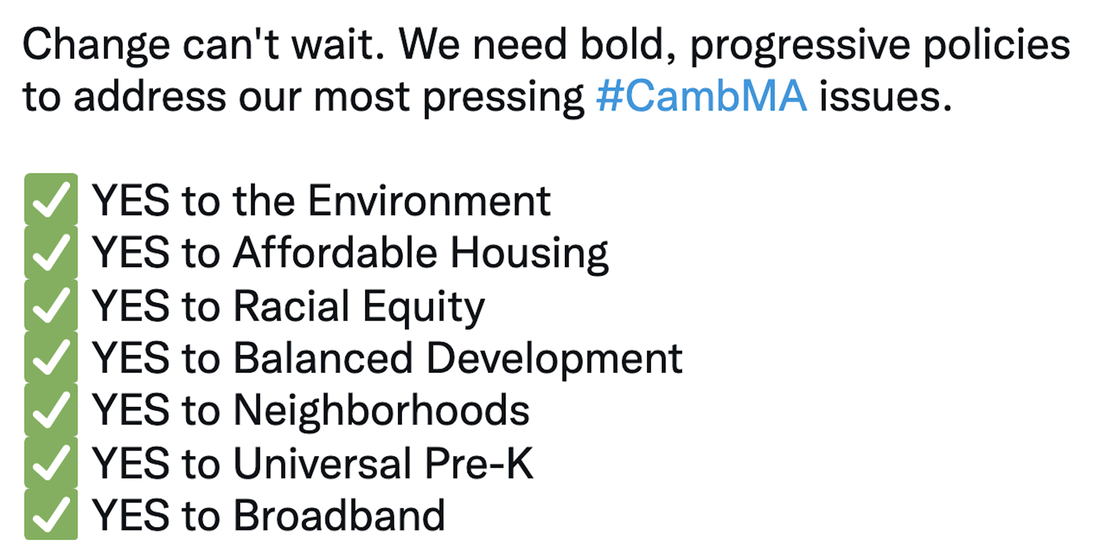 Read the candidate questionnaires and news about the 2021 Cambridge City Council Election:    www.cccoalition.org/election.html
NEED TO REGISTER TO VOTE?​  GO TO:   bit.ly/Register2voteMA
Register to vote by October 13, 2021
VOTE BY MAIL  Apply for Mail-in Ballot by Oct 19, 2021
Email: elections@cambridgema.gov     Fax: 617-349-4366
Mail to the Cambridge Election Commission   51 Inman Street. 0213
Return Ballot to above address by Nov. 2
*Allow up to 7 days for ballot delivery by mail in each direction.

POLICIES THAT MATTER ON:

3. Smart Growth - we need a Citywide plan for smart growth (people before profits)

5.  We live in an historic city; let's work together to preserve  our rich architectural diversity.

6.  Policies for equity (from Broadband and  HEART to Universal Pre-K) 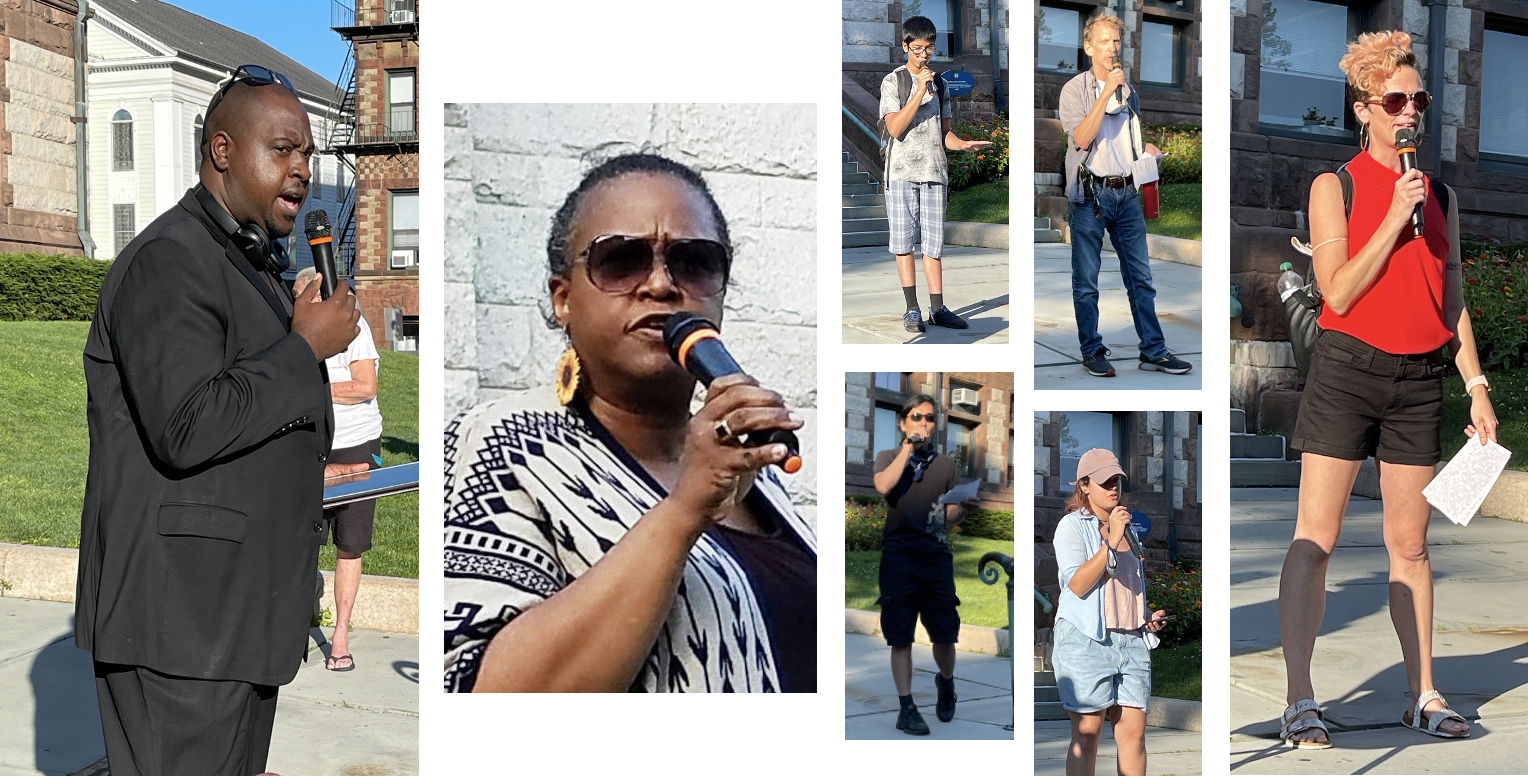 An important rally hosted by My Brothers Keeper and focused on recent gun violence (photos below) preceded the above tree rally at this same site.

Earlier, on  June 17, 2021, many CCC leaders were out in support of a housing rally. the Peoples Housing Rally,  opposing the  misnamed Missing Middle Housing petition that  sought to up-zone the whole city to add more luxury (market-based) housing in backyards and other areas (see images below).

click here *Stop Assault on Conservation Petition*
This petition has been introduced and forwarded by City Council to the Ordinance Committee. This petition ,that one could  call the "Neighborhood Conservation District" (NGC) Assault Petition, was received from an individual often allied with  the pro-developer political Pac calling itself  "A Better Cambridge (ABC)." The petition seeks to gut Cambridge's long standing architectural preservation means, local areas established by neighbors to preserve the unique eclectic mix of housing in their area. What this petition does? It removes the right of citizens to petition the City on this matter, enabling City Council (who already must approve any new Conservation District after the study period, to stop the process before it even starts. Citizens will  lose long established rights. And, Council (not citizens) can change the language of established  districts, and have redefined criteria for existing Boards, from District residents who bring professional knowledge to  these issues, to simply ones ownership status.   Who benefits? Largely out-of-time developers, and non-resident monied investors (many of whom represent national and global financial interests), and those seeking to build large McMansions inconsistent with our long-standing local neighborhoods.  Why this matters? Cambridge, founded in 1630, one of the oldest planned cities in America. Its history, and the legacy of its rich architecture matters - whether we are talking about workers cottages or more elite residences,  workplaces, or one time battlegrounds. Because Cambridge neighborhoods matter, and this is just one more effort (based in part on a national drive) to end restrictions on developers and investors to build more luxury housing in this already very dense and very historic city - further gentrifying these areas, and forcing out long term lower income residents. We know that Neighborhood Conservation Districts help to keep rental and housing costs more stable, but this is not just about economic issues, and we know that our tourism economy and local businesses are dependent on our unique historical and architectural legacy; This petition  is also about environmental sustainability - maintaining sound architecture. Please write City Council at: council@cambridgema.gov  and CC the City Clerk at: cityclerk@cambridgema.gov
​
​​​Read: the "Neighborhood Conservation District Assault Petition" at  www.cccoalition.org/docsinfo.html