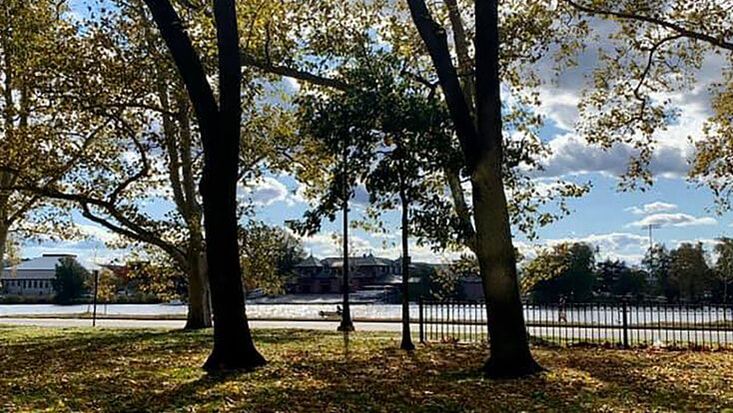 Wake-up, Cambridge!  Real estate development has been running our city. For many years, commercial developers have been given free reign from Alewife to West Cambridge to North Point and East Cambridge, encouraged by our own City government. It is time to take a hard look at what we, as residents and tax payers, want for the future of Cambridge.

Please Join the Cambridge Citizens Coalition (CCC), a nonprofit organization comprised of residents from ALL of Cambridge. Our mission is to put the interests of residents over the interests of developers, to foster common sense over nonsense in City Hal, and to ensure that future development sustains the health of the entire community rather than just lining the pockets of developers and driving even more of our neighbors away.

Cambridge needs and deserves a City Council that is professional not blindly ideological; that represents the city of Cambridge not just those with money and advantage; that brings all of us together in common cause instead of dividing us for narrow political ends. Above all we need a City Council that tells us the truth.

We need to respect all that is best about Cambridge: the welcoming atmosphere for diverse communities, the human scale, the spirit of innovation, and unique qualities of every neighborhood. The Cambridge Citizens Coalition welcomes all Cambridge residents of every ethnicity, gender identity, and income, whether renter or homeowner, whether old or young, whether worker or student, what every type of family you have, however long you've been here.

To protect the most special qualities of a city we all cherish, we must have new voices of reason and balance on the City Council. Join the Cambridge Citizens Coalition today!
WHO WE ARE
​​We are a group of Cambridge residents from various parts of the city who support smart, responsible growth, affordable housing, sustainability, the preservation of our environment and the enduring importance of our architectural legacy. Recalling the earlier Cambridge Civic Association (CCA), a central theme of the Cambridge Citizens Coalition (CCC) will be "good government" and policy benefiting the city as a whole.

​The original CCA was formed for the following purposes that CCC also supports:

CCC's BOARD OF DIRECTORS  ​ 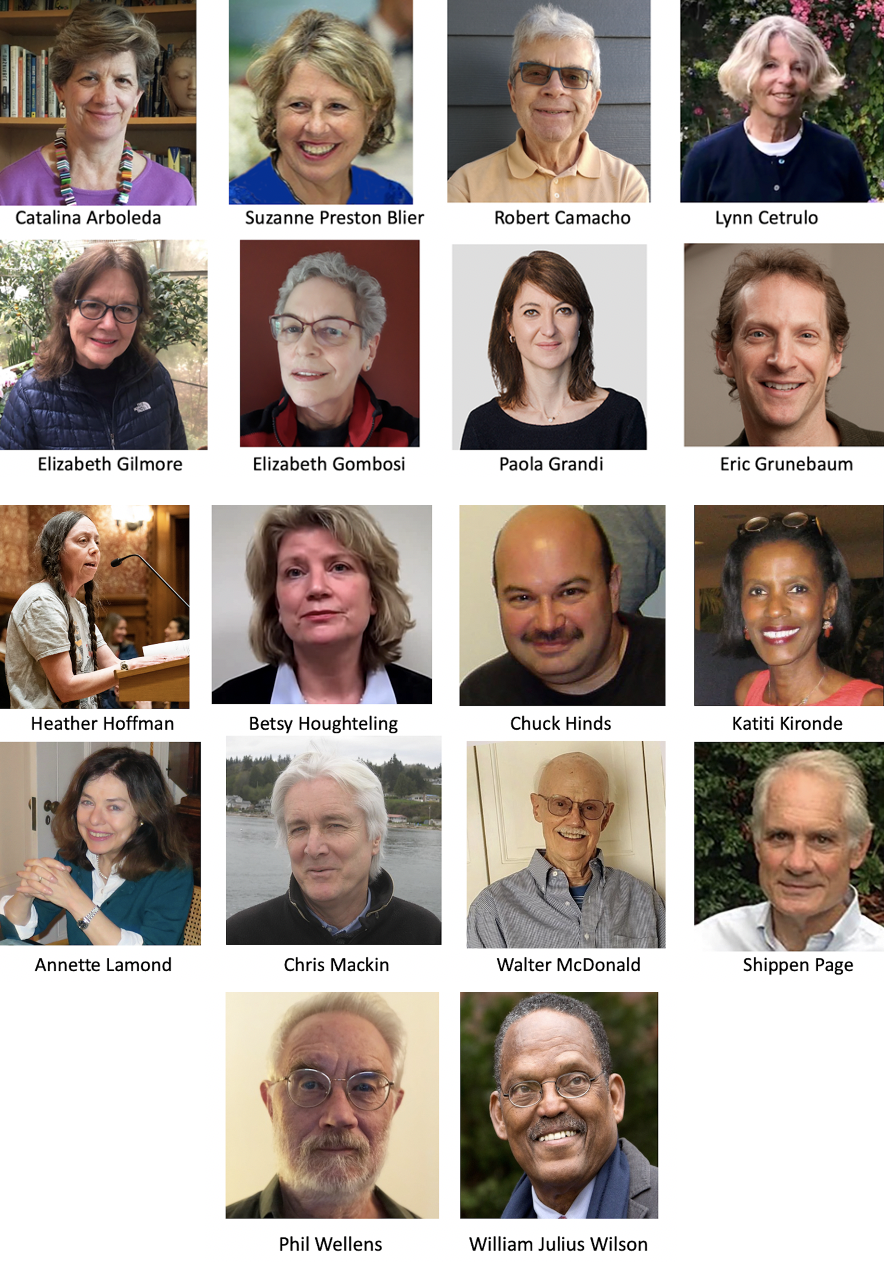 Education: We have attended a broad array of local educational institutions – Babson College, Boston College, Boston University, Harvard University, MIT, Northeastern - and others both in the U.S. and abroad. We studied a wide variety of subjects –from economics to software design, from art history to biochemistry.

Board Members
Catalina Arboleda (Mid-Cambridge). A psychologist, and native of Colombia, Catalina came to Cambridge as a Harvard Undergraduate. She is active on her Mid-Cambridge condo-board and travels frequently internationally.

Suzanne Preston Blier (Harvard Square). An art and architectural historian specializing in Africa, a subject she teaches at Harvard and writes about frequently. Building on efforts to save the Kiosk, she helped to found the Harvard Square Neighborhood Association and the Cambridge Citizens Coalition. She has worked on local architectural preservation, zoning, and other issues. CCC President.

Robert Camacho (Fresh Pond). Bob was a member of Warner Brothers rock group Swallow, later building a career in corporate training and software sales, most recently with Bose Corp, where he was a software test writer/developer for Bose Wave radio DVD player. A Vietnam war vet, today he volunteers as a musician at area VA Centers.

Lynn Cetrulo (Fresh Pond). Lynn grew up in Michigan and has been a Cambridge resident since 1971. She is both a psychiatrist social worker and a lay psychoanalyst, affiliated with the Boston Psychoanalytic Society and Institute, and has a private practice in Cambridge. She has served, and continues to serve on a number of non- profit boards and is a member of The Cambridge Club.

Charles Hinds (East Cambridge) Commercial Realtor and President Hinds Associates. Previously with Group Boston Real Estate, and before then a Software developer and manager. Chuck, who holds a Computer Science M.A.  is President of the East Cambridge Planning Team and has been addressing development and preservation concerns.

Elizabeth Gombosi (Mid-Cambridge). Elizabeth is the presiding officer of Kinhaven Music School Board in Weston, VT. She was the Associate Director (ret.) Archaeological Exploration of Sardis and has long been involved with the Mid-Cambridge Neighborhood Association where she currently serves as Membership Secretary. CCC Vice President

Paola Grandi (Mid-Cambridge). A scientist who is Italian by birth, Paola lead oncology-focused biopharmaceutical companies and co-founded Oncorus. She has taught in the University of Pittsburgh School of Medicine, her research sponsored by the NIH/NCI grants. Now a graduate student at Babson College, with a son in Cambridge public school. She is deeply committed to re-cycling and sustainability.

Eric Grunebaum ( North Cambridge). Eric is a Principal at Cambridge Energy Advisors, and has consulted on and developing solar and energy efficiency projects. He is also a broker in clean energy impact investments. An activist in restoring Jerry’s Pond on Rindge Ave. he is also a filmmaker, whose works include The Last Mountain, a feature documentary on coal and clean energy in West Virginia.

Heather Hoffman, J.D.  (East Cambridge). Heather is a long time Cambridge activist who serves on the boards of both the Association of Cambridge Neighborhoods and the East Cambridge Planning Team. She attends lots of meetings and enjoys hosting the Hurley Street Neighborhood Farm. CCC Treasurer.

Elizabeth (Betsy) Houghteling. (West Cambridge).A long-time volunteer, Betsy served for 12 years as Overseer and Trustee of the Museum of Science. She also has worked on political campaigns and for education non-profits.  During the Dukakis administration she was Director of Communications for the Department of Revenue. A Kennedy School graduate, she and her husband enjoy being a “host family” for international students. .

Katiti Kironde (North Cambridge). Katiti launched a career as fashion designer with an eponymous clothing line in the years after becoming the first African model on a women’s magazine cover (Glamour) while a Harvard Student. She and her husband who raised their children in Cambridge, founded the Kironde Education and Health Fund (KEHF) in her native Uganda.

Annette LaMond (West Cambridge).  A Ph.D. in economics, Annette is an author, editor, and consultant, whose research has ranged from industry regulation to Cambridge women's history. A longtime member of the Cambridge Plant & Garden Club, she has advocated for public planting projects throughout the city. She is currently leading a neighborhood campaign to improve traffic safety.

Christopher Mackin (Harvard Square) – Chris, long-time renter in Cambridge, is Founder and President of Ownership Associates, Inc. based in Cambridge and a special advisor to American Working Capital LLC. He teaches part time at Rutgers University. He serves on the Board of the Harvard Square Neighborhood. Association.
​
Walter McDonald (Cambridgeport). Walter was Associate Director at the North Bennett Street School (a post-secondary Boston trade and craft school), where he hired and supervised instructors and oversaw curriculum. Previously he taught history in high schools in Waltham and Tanzania and later was Director of Financial Aid at UMass Boston.

Shippen Page. J.D.  (West Cambridge). Shippen’s law practice includes the areas of estate planning, residential real estate, and mediation.  He chairs the Board of the Cambridge Public Library Foundation, as well as the Advisory Council of Revels. He is Emeriti Director of Cambridge Neighbors and is an honorary member of the Ward 9 Democratic Committee.

Phil Wellons, J.D. (Riverside). Phil specializes in international financial markets, transactions, and comparative political strategies, as a lawyer and faculty member. He was Deputy Director of the Program on International Financial Systems, working in the Zambian finance ministry, and as international consultation on five continents. Locally he has participated in several zoning initiatives.

William Julius Wilson, Honorary (MIT/Port). Geyser University Professor Emeritus at Harvard, Bill has written extensively on issues of race, class, and poverty. The holder of a National Medal of Science, among many other honors, his many books, have transformed the way that we see key issues of societal imbalances today. 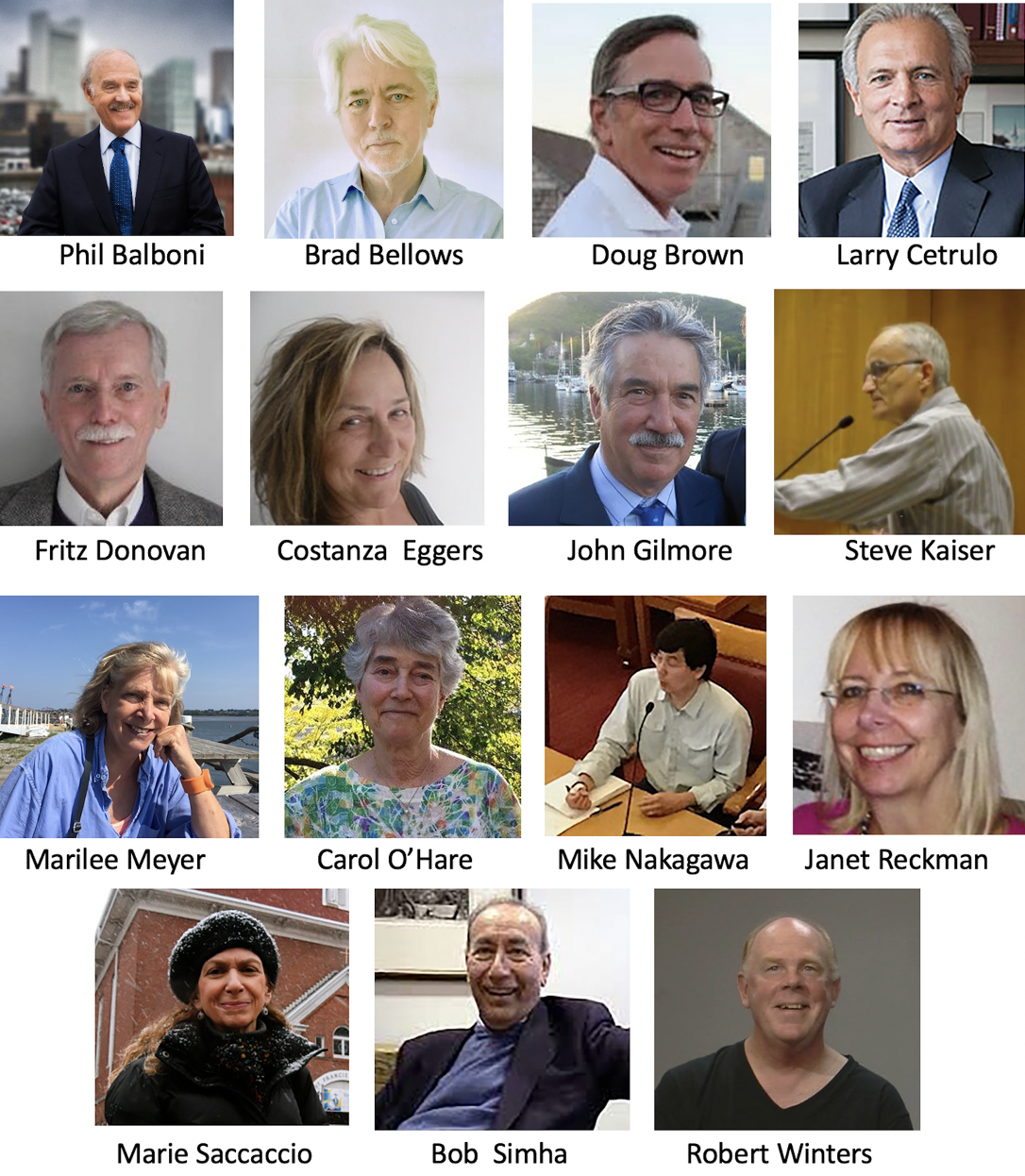